This year we held the Membership Drive early, August 30th,  to double up with a 65th surprise party for Patty Malone.  We reserved the lobby of the Lenoir City Event Center, added tables, decorations and Mexican food for a grand celebration.   All members who paid their 2017-2018 club dues were entered into a drawing to win a FREE membership to our badminton club.  And the winner is.........Bill Bixby.  Congrats Bill.

The food was delicious and it's members who attended the function gave Patty a gift certificate to a Spa.....and.....a pair of very fancy pink petty coat undees that we are still waiting to see her wear over her leggings.   A fun time was had by everyone.  Click on the "photos"  link below to see the ALL pictures of the event and all our badminton friends.
Photos 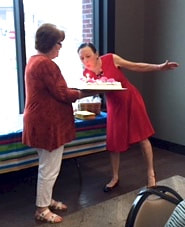 The Tellico Village Badminton Club's fiscal year is November 1st to October 31st.  Each September the club holds a "pot luck" supper and it's members have the opportunity to pay their club dues at the dinner.  The last two years the Badminton Club held a drawing for any member who pays their dues up to and including the day of the Membership Drive Dinner.  The drawing awards the winner of the drawing a free membership for the current year.  This year's winner was Michaela Barber who graciously refused her gift and donated it back to the club.

Needless to say, we all ate very well and all enjoyed ourselves.  Take a look at the smiling faces...everyone is enjoying themselves! 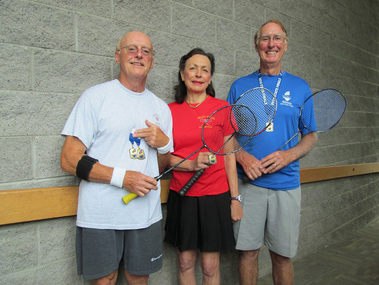 The Tellico Village Badminton Club would like to congratulate our club members who played badminton in the 2016 Senior Olympics:

These club members have participated a number of years in the Senior Olympics. They expressed their pride in representing our club and would like to encourage members of the community to try the sport  badminton.  Club badminton is a challenging sport, not at all like the “picnic or backyard” type we remember from youth. Club play requires focus and the ability to analyze and adapt your game by understanding different strategies and techniques used in the sport.

Badminton is the fastest racket sport in existence and is a lot of fun whether you play seriously in tournaments like the Senior Olympics or more casually in club play. You will find it provides lots of exercise, both physical and mental. Plus, our club, which is relatively small, promises you enjoyment, both on the court and through our many social activities.

To try the sport, sign up for Badminton Orientation at the Chota front desk. You can borrow a racket there, too. Patty Malone, club Training Director, will contact you to set dates for your Orientation. ​

Below are personal thoughts regarding this year’s Senior Olympics that Ron Wendoloski would like to express:

"I’ve played the state finals in 11 of the past 12 years and have had many memorable experiences. But this year is
one of the most satisfying.    Besides having success in all three badminton events, in one doubles event my partner
and I finally achieved a long standing, significant goal in overcoming a highly skilled opponent. To do so we had
to keep our focus on a certain strategy and execute well.

That’s the thing about badminton.  Besides physical skill, it can also be a thinking game like chess.  This fact was
a deciding factor in all my events.  Skill, strategy, and “heart” all come together in this sport, and I’d like to
​        express my thanks to both my partners". 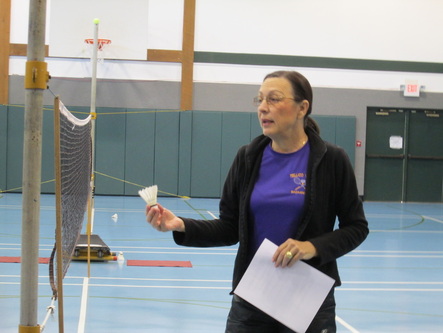 Our 3rd “Feather Birdie Day” was a huge success. We had 28 members in attendance. We started with a short program about feather birds, how they are maintained and how they are made. The information members found most interesting was the following: Feather birds are made from the left wing of a white goose. The reason only one wing is used is due to the fact that the feathers coming from the same wing fit together like a puzzle causing the bird to fly with stability. If, during production, you combined the right wing feathers with the left, the birdie would be about as easily controlled as a “cow-lick.”

Chris, the club's Social Director, did a wonderful job putting our dessert table together, taking photos and keeping everything moving. Thanks Chris!
With our large turnout, we split the group inviting about half the members to enjoy desserts and socialize while the other members played. Then, we “changed out” the groups.


This proved to be a very nice special event giving lots of members the opportunity to “get the feel” of playing with feathers. 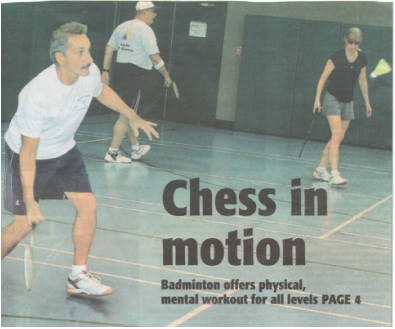 From racquetball aficionados to beginners the Tellico Village badminton club provides an opportunity for people of all skill levels to compete and stay fit while enjoying a unique and fast pace sport.  "We try to serve the community and give them the type of sport they want,  Patty Malone club director of training said,  if it's casual or exercise we have it,  and if it's tournament play or competitive play we have that too.

Malone who is been a part of the club since its inception about six years ago is a former tennis player who was attracted to the sport because it can be played regardless of weather conditions.  Here in Tennessee, tennis is heavily dependent, at least in our community, on the weather, so badminton gave me the opportunity to play all year round" Malone said.

Jerry Gaither who is considered an A-level player (an experienced player) in the club, moved to the village two years ago and got involved with the club on the recommendation from a neighbor.   "I grew up in Tennessee so all I ever knew about was baseball,  football. ... We didn't play soccer or anything like that."  Gaither said, noting that he had never played a racket sport before joining the club. "It's the fastest sport there is as far as any moving object." Gaither said.  "That birdie, when you really smash, it's faster than a jai alai ball and you've really gotta be quick, and it's challenging."

The club offers competitive play on Thursdays and has practice throughout the week, and the club also partners with a badminton club in Chattanooga to hold tournaments.  Gaither said more experienced players can still be challenged during club practice sessions even if they are teaming up with newcomers to the sport.   "For us that's challenging because you're covering territory that you normally wouldn't cover with another A-player" Gaitner said. 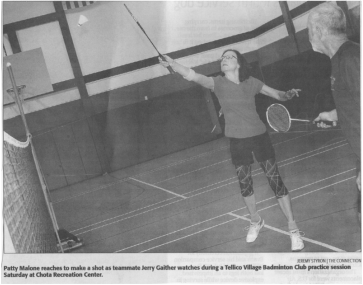 Jim Roccasalva,  who also had not played racket sports before getting introduced to badminton, has been a player for about a year.  He is a club member along with his wife Trudy.  My wife and I got active in the sport because of the exercising and the hand-eye coordination that it takes to develop and because there were the skill levels not to mention the quality of the people --- where we played other sports --- the closeness of the badminton club is second to none.   Roccasalva said "they generally care for each other."  He said speed of play was one demanding aspect of the sport.  You have to have good hand eye coordination of course for all racquet sports but you have to have good foot coordination also for badminton,  Roccasalva said.

Malone said badminton also required mental dexterity.  "It's like a chess game in motion" she said.  It's a lot of thinking and then you couple that with the extreme physical demands and you get a very good overall mental and physical workout."

To become a member residents go through an orientation program.   The club currently has about 75 members.  For more information call Malone at 865-458-7937